When Stephen Bourne sat down to interview his Aunt Esther he had no idea that her trip down memory lane would form the basis of the first of his many books about the lives of black Britons.

“You learn history from your relatives talking about their lives and Aunt Esther’s first hand account of being a black Londoner long before large-scale post-war migration planted a seed in me. I simply wanted to find out more,” he says.

Esther Bruce was not in fact a blood relative but an “adopted aunt”, who’d been born in 1912 to an English mother and Guyanese father and grew up in Fulham, west London.

“I come from a white working class family who’d known Esther as a child,” explains Stephen. “Her father raised her as a single parent and when he died my great grandmother asked her to move in with them. By the time me and my sister were born she was our aunt. It was a wonderful education and gave me an awareness of black people that most white children growing up in the 1960s would not have had.”

Published in 1991 just a few years before her death at the age of 81, Aunt Esther’s Story excited such a lot of interest that she was eventually included in Oxford University Press’ Dictionary of National Biography alongside Winston Churchill and Queen Victoria.

Twenty eight years down the line, Stephen’s latest book Black Poppies glances back at her Edwardian childhood alongside a wonderful collection of stories of black people living in Britain during and after the First World War, not just in the big cities but far flung places like Cornwall where Royal Navy sailor Richard ‘Dickie’ Barr was born in 1888. 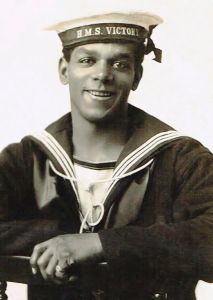 Originally published in 2014 to coincide with the centenary of the war and now updated with new chapters, Black Poppies’ main focus is the black servicemen who fought for king and country in huge numbers. It is a contribution that has been shamefully excluded from the history books, says Stephen, with the recent exception perhaps of the footballer Walter Tull, who died on the battlefield of the Somme and was one of the few black soldiers to be promoted through the ranks to become an officer. A fascinating set of photographs included in the book shows many of them posing solemnly in their uniforms or in cheerful groups with their white comrades-in-arms.

Tull was born in Britain but thousands more traveled from different parts of the empire to volunteer for war service and many settled here after being demobbed, among them Charles August Williams from Barbados, father of Yorkshire-born comic Charlie Williams, and Jamaican Selvin Campbell, a member of the British Expeditionary Force with a talent for song and dance, according to his daughter Cleo Laine. Then there are those who returned to their countries like Jamaica’s founding father Norman Manley. Letters from his brother, Douglas, who was killed at Ypres, are one of the book’s few primary sources, given the passage of time.

Stephen has written more than 10 popular histories exploring Britain’s black presence, with an emphasis on the years before the arrival of the Empire Windrush in 1948.

“This is the symbolic marking point of African and Caribbean settlement in Britain but in fact black people have been living in this country since at least the mid-16th century in large enough numbers to be part of the national story,” he points out. “But they have been made invisible and it is a problem that permeates British culture and society. ”

From Camberwell fireman George A Roberts to classically trained singer Evelyn Dove and Liverpool-bound Sierra Leone stowaway Ernest Marke, the Black Poppies came from all walks of life. But whatever their background, they faced inevitable discrimination and during the 1919 riots in Liverpool, Cardiff and East London possible death at the hands of the mob. The settlers’ response to all this by way of organisations like the League of Coloured Peoples and African Progress Union is also documented to form another thread of history.

But people’s common sense of humanity shines through, too. Refused work at a hospital because of his colour, Harold Moody became a much loved GP in Peckham, a street in Canning Town, once attacked by racist outsiders, was affectionately nicknamed Draughtboard Alley because of the number of black and white families living side by side, and Aunt Esther, whose teacher advised her fellow classmates not to lower themselves by talking to black people, was embraced by the family down the road.

“In terms of the feedback I received from the many talks I have done, Black Poppies has really hit a nerve. What hasn’t changed over the years is how you have to work 10 times harder to get attention from the mainstream media and those on high for anything about British black history,” he tells me with a note of exasperation in his voice. “Despite its success, Black Poppies has only ever been reviewed by one national broadsheet, and once I was asked to do a talk at the Houses of Parliament to which all MPs got an invite – only one turned up, and he was a Conservative.”

Written in a clear and precise style with many different but converging strands, the book has clearly been a labour of love. Stephen is driven on by the enthusiastic grassroots response he gets and pointedly includes a letter in the book’s introduction from a prisoner saying how much it instilled in him a sense of pride and belonging.

“I was deeply moved because that is what the book is about – changing hearts and minds,” he says.

Black Poppies by Stephen Bourne is published by the History Press, price £12.99

This article first appeared in the Review on September 26 2019