When singer Ray BLK topped the BBC’s Sound of 2017 she became the first unsigned artist to win an honour that had previously gone to the likes of Adele and Sam Smith.

For journalist and author Lloyd Bradley it once again underlined how black music continues to make waves on its own terms, forcing the musical establishment to completely change the way it does things.

“Ray BLK is significant because the Beeb was acknowledging that unsigned artists are a valid and vibrant contributor to the whole music sphere,” he says. “In the past the attitude was, if you haven’t got a record deal you can’t be up to much. Now it is the musicians who are calling the shots.”

Fifteen years earlier the Corporation set up dedicated black music station Radio 1Xtra in direct response to  pirate radio that was draining away its listeners, another example of a move from the margins to the mainstream.

The theme is more fully explored in Black Sound, an exhibition at Brixton’s Black Cultural Archives telling the story of 100 years of black music in the UK, from jazz, calypso and reggae through to funk, jungle and grime.

Bradley, considered to be Britain’s pre-eminent expert on black music thanks to his best selling Bass Culture and Sounds Like London, helped to put it all together, using visuals, film and sound to describe a journey that began with the arrival of the Southern Syncopated Orchestra in 1919, a 27-piece jazz band which made such an impression on straight-laced Edwardian London that it ended up playing for the folks at Buck House.

Eddie Grant (l) with Bradley at the exhibition last year

“The story of black music in Britain is a big one and you cannot tell it with a few album covers,” the former NME and Q scribe says bluffly over the line from Florida.

“When I started looking at it I wanted to see what the different eras particularly had in common. The link was that the characters involved always operated outside the mainstream and were not subjected to the same values. They developed a do-it-yourself culture that has always been able to operate successfully under the radar of the mainstream music business.

“It is this DIY culture that has been the prevailing narrative. Whereas rock music is still basically re-inventing the Beatles and their guitars and drums format,  black music has moved on through so many genres. Now we have grime, a many-tentacled beast which seems to re-invent itself every three or four weeks,” he adds laughing. 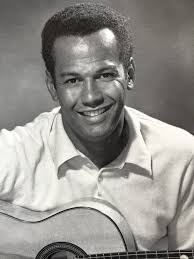 Originally scheduled to end last November, the exhibition has been extended until mid-February due to popular demand. What also jumps out is just how sought after black musicians were in the inter- and post-war years. The Guyanese-born clarinettist Rudolph Dunbar conducted the London Philharmonic Orchestra at the Royal Albert Hall in 1947 while a few years later rag time pianist Winnifred Atwell became the first black artist in the UK to sell a million records, among them two No 1 singles.

However, calypso was the dominant sound, popularised by the likes of Lord Kitchener direct from Trinidad before seamlessly becoming the crossover sound of ballrooms and jazz clubs. Marie Bryant’s risqué Don’t Touch Me Nylon was such a hit that it prompted questions in parliament while crooner Cy Grant had his own daily calypso spot on TV.

By the 1960s as Commonwealth immigration accelerated, Jamaicans came to form the biggest migrant group and the sound track dramatically changed. The hostile environment greeting the newcomers gave rise to an underground but flourishing music scene based around sound systems, indie labels and small recording studios, a business template that exists to this day.

“People also took advantage of things available to them like using food outlets to distribute records and a network of clubs to play the music,” explains Bradley, currently working on a history of 1970s US funk. “Most of all, they were able to always adapt – fans easily get fed up and they want something new.

Experimentation produced the phenomenon of lovers rock, a uniquely British style of reggae for a new generation of youngsters that challenged the supremacy of imported Jamaican roots reggae and saw Janet Kay sing Silly Games on Top of the Pops.

“During the second half of the 1970s lovers rock singers were selling 100,000 records completely independently,” adds Bradley, ghost writer on  footballer Ian Wright’s latest memoirs. “Punk happened during this time and it seemed like another aspect of DIY culture. But at the end of the day all they wanted to do is get signed to mainstream record labels. All black acts wanted was to be heard on the sound system.”

He lists Eddie Grant, Jazzie B and Dizzee Rascall as part of a long line of musicians who pushed the  boundaries and did things their way. Nowadays, with so many aspects of the music business democratised by new technology, artistes can record their own music, make their own promotional videos and design their own merchandising, marking a complete shift in the traditional power structure that musicians in general are taking advantage of.

“Black music pretty much dominates the mainstream,” asserts Bradley. “The brilliant thing about it currently is that it has come so far and has done so entirely by itself. It cannot be sidelined anymore.”

As for what is going to be the next big thing in black music, for all his expertise he admits he hasn’t a clue.

“Fifteen years ago I never predicted grime,” he laughs. “But these characters are far too creative and hardworking for anything not to happen.”

This article was first published in the Review, New Journal Enterprises, on January 25 2018