They stare out of the frame with the stillness and solemnity characteristic of Victorian studio photography, except that these boys and girls are black and their remarkable images were taken after being admitted to the first Barnardo’s homes more than 100 years ago.

Who they are and how they came to be in the care of the charity is being revealed for the first time thanks to Barnardo’s decision to share its records of them, casting light on a page in British history that most people are unaware of.

Even more astonishing are the children’s back stories, made in ‘admission statements’ to staff, that could equally be at home in the novels of Charles Dickens or Robert Louis Stevenson.

“They are full of incredible drama and pathos,” says historian Avril Nanton, who gave a talk on the subject in Barnardo’s East End heartland earlier this month.  “One boy, Jaesell Malcolnzie, survived being stabbed in the neck by soldiers who had murdered his whole family during the siege of Khartoum in the 1880s. He managed to get a boat to England from Egypt, arriving in Liverpool in 1892, where he was found wandering the streets. He was 16 years old.”

There are more tales of derring-do like that of teen stowaway Edward Allen who was rescued at sea near the Azores and put on a ship bound for London in 1887, but also very sad ones too. Maggie Robinson was admitted to Barnardo’s in 1893 aged seven after her father ran off and her mother was imprisoned for being drunk and disorderly, while six-year-old Elizabeth Mouncey was found next to the body of her dead mother in 1891.

“Barnardo’s recorded her as having ‘evidence of foreign blood in her veins’ and she was put in the care of its Girls Village Home in Barkingside after no one else would take her in,” explains Avril.

“Like many of the children, she was probably the result of a relationship between a local woman and a black seaman.”

Alongside an orphanage for boys in Stepney Causeway, the Girls Village was one of the first homes set up by Irish philanthropist Thomas Barnardo in the 1870s. By the time he died in 1905, the charity ran 96 homes across the country with 8,500 children in its care.

Barnardo’s work began in Limehouse, where he founded a ‘ragged school’ for impoverished children but realised most of them lived on the streets. A number were black and Barnardo’s was the first charity to take them in as part of its mission to never turn away a destitute child.

“It is fascinating to know that these children existed in the Victorian era, bearing in mind also that it was just a few decades after the end of the slave trade in Britain,” adds Avril, a bubbly personality whose stock in trade is giving presentations on popular history and guided historical tours.

As part of her research she visited the Barnardo Archive in Plaistow where 500,000 records are stored in  air conditioned rooms, each hand-written entry accompanied by a photo. “Many of the early photos were taken by Barnardo himself,” she tells me. “Children are recorded by the date of their arrival but their ethnicity is referred to in terms of the day like ‘dark’, ‘coloured’ and ‘octoroon’.” 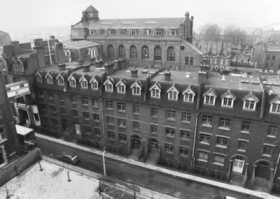 While a number of the accounts are fairly detailed others are tantalisingly vague. We learn that teenager Augustus Williams, originally from Jamaica, “returned to sea” in 1891 after spending a year in care, while another former Barnardo’s boy, Hezekiah Mascow, went on to work as a “lion-tamer” in Bishopsgate before becoming a “traveller”.

However, many of the girls ended up as domestic servants having been trained for such work by the charity, which, conveniently, ran its own employment agency. One of them, Marie Roberts from Stamford Hill, was only 14 when she was put out to work, having joined Barnardo’s four years earlier in 1905 when her mother was taken to hospital half-starved. The aforementioned Elizabeth Mouncey also worked as a servant and then as a cook. Her last contact with Barnardo’s is noted as being in 1946, when she would have been in her seventies.

“These children were clearly very fortunate to have been taken in – they had nothing and they were brought into a situation where they were offered a chance to make something of their lives,” says Avril. “It is a real privilege to be able to glimpse into their world more than a century down the line.”

For information on forthcoming events by Avril Nanton visit http://www.avrilstalksandwalks.co.uk

This article was first published by the New Journal Enterprises group of newspapers on October 13, 2017