On a crisp winter’s afternoon 21 years ago a group of people gathered in the shady grandeur of Highgate cemetery to commemorate the civil rights champion Claudia Jones.

Deported to Britain from the United States during the McCarthy witch-hunts, she died at her Gospel Oak home after playing a dazzling role in the anti-racist struggles of 1950s England.

Incredibly, the woman once described by Paul Robeson as “one of America’s finest daughters”, would lie in an unmarked grave next to Karl Marx’s tomb, all but forgotten outside a loyal circle of friends and fellow activists. 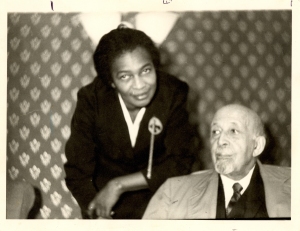 One of them was a former Camden Council youth worker Winston Pinder who ran the Afro Caribbean Organisation in King’s Cross in his spare time. A rallying point for local black youth, the organisation decided to launch a fund raising campaign to buy a headstone for Jones’ final resting place.

“Claudia made an immense contribution to the fight for social justice and equality, yet there was no recognition of her,” says Pinder. “We wanted people to know who she was and what she stood for.”

The youngsters held a series of fund-raising parties at the Afro Caribbean Organisation’s premises in Gray’s Inn Road and donations began to flow in. The biggest – £300 – came from the People’s Republic of China, which held Jones in particularly high regard following her visit there in the early 1960s.

But a battle royal ensued when Abhimanya Manchanda, Jones’s partner who had bought the burial plot, threatened Pinder with legal action for “interference”. But a year later, on January 6 1984, a stone was laid at a moving ceremony attended by many of Jones’s fellow campaigners including the American journalist Mikki Doyle, who had been deported with her, the actress Corinne Skinner-Carter and singer Nadia Cattouse. MP Tony Benn sent a message of support.

But apart from a mention in the local press and the communist Morning Star, the event, like Jones’s achievements, passed completely unnoticed.

Today, a resurgence of black consciousness has elevated Jones to the ranks of forgotten black heroes and heroines who have been reclaimed for posterity. She has also been the subject of a number of books including Claudia Jones: A life in exile by Camden-based historian Marika Sherwood. And this week US academic Carole Boyce-Davies, is to inaugurate the Claudia Jones World Series Lecture at the London Metropolitan University in Holloway at a conference chaired by actress Cathy Tyson.

Even so, those who knew her feel that her extraordinary contributions have gone largely unacknowledged.  “The younger generation of blacks born here have no idea what life was like for us in the 1950s, so they don’t make the connection,” says Donald Hinds who worked closely with her.

When Jones began her exile in Britain, growing hostility towards newly arrived Caribbean migrants would boil over into race riots in Notting Hill. Black London felt under siege and Jones, a charismatic speaker and brilliant organiser, was able to give it a voice through her tireless campaigning and her newspaper, the West Indian Gazette. In truth, they were one and the same thing.

In 1959, she also brought the first carnival to London. Although it was held indoors during winter at St Pancras Town Hall it helped to wash away the bad taste of Notting Hill.

Jones had honed her political skills in the US, where she had emigrated from Trinidad as a child. A prominent communist, she was considered to be a subversive by the authorities, who jailed her for a year before kicking her out of the country in 1955.

Her health permanently broken, she nevertheless threw herself into the political frontline. Pinder, who had recently arrived as a young man from Barbados and worked as a Post Office engineer in King’s Cross, met her while she was selling copies of the Gazette on a Brixton street corner.

“We got talking and I agreed to sell it at work,” he says.  Like many, he would come to regard her as a political mentor. He also recalls a lighter side to her character. “Claudia loved to dance and have a drink and was always fun to be with,” he says.

Trevor Carter, a distant relative who lives in Archway and whose wife Corinne used to do Jones’s hair, remembers how she stood out with her American style.  “She was a power dresser who’d sweep into a pub and order a double Scotch while everyone else would be having half a lager and lime,” he laughs.

Yet beneath the charm and warmth was a very private person.  Carter says: “You were drawn to her but she never let you in too close. And nobody could see what she saw in Manchanda.”

In fact, few people realised how ill Jones was. When she died at her home in Lisburne Road in 1964 at the age of 49, she was alone and penniless. It was two days before anyone found her body.

“She had spent just nine years in London but left us with so much,” declares Hinds fondly.  “Most of all, she taught us that there was hope as long as there were people around to say ‘No’”.